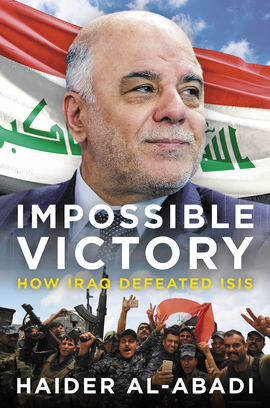 By 2014, the world had grown weary of Iraq and its troubles. The Americans had all but gone and the media had turned its gaze towards Syria, but Iraq’s problems were far from over. That same year, ISIS put Iraq back on the map as they crossed the border from Syria and rampaged through the country, kidnapping, raping and killing, all in the name of enforcing their murderous interpretation of Sharia law.

Terror had arrived and was taking the region in its grip. Saddam Hussein, the occupation, sectarian war, corruption and political instability had collectively laid the groundwork for further violence, and Iraqis were about to see the worst of it.

It was against this backdrop that Haider al-Abadi became Prime Minister. What would likely be the most formidable task of his life lay ahead of him: to help unify his homeland’s fractured military and politics and, slowly, to turn the tide on ISIS, ultimately achieving what once seemed an impossible victory.

This is the definitive and fascinating true story of how the people of Iraq took on and eventually defeated ISIS, told by the country’s former Prime Minister, Haider al-Abadi.

“Impossible Victory is the definitive memoir of Iraq’s effort to save its people and many other would-be victims from the most destructive terrorist organisation in history. But it is also a compelling story of a life lived well despite the trauma and tumult that has stricken Iraq over the past half-century. It is clear that the author, former Prime Minister Haider al-Abadi, was the right leader at the right time. This book should be read by anyone interested in the recent history of Iraq and the Middle East, as well as anyone who wants to learn how to lead in extremis.”

“I remember meeting Mr al-Abadi as French minister of defence, when he was Prime Minister of Iraq. His determination to fight terrorism was striking, and so was his vision during some of Iraq’s darkest hours. As the French minister for Europe and foreign affairs, I am now proud to stand shoulder to shoulder with the Iraqi people and our allies around the world in favour of justice and the fight against terrorism. France will always be a steady partner in this battle. This book, which reflects on Mr al-Abadi’s time as Prime Minister of Iraq, casts a historical light on a decisive era. It will be valuable for anyone wishing to have a deeper perspective on how things happened in Iraq in the fight against Daesh.”

“Impossible Victory is Haider al-Abadi’s engaging, highly personal memoir, taking in his childhood in Baghdad, his opposition to Saddam Hussein and his years in exile in the UK. But the heart of the book is his time as Prime Minister of Iraq during the fight against Daesh. It is a remarkable inside story of the war from the perspective of the Iraqi Commander-in-Chief. Fascinating, very readable and recommended.”