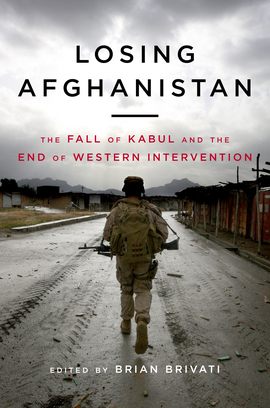 Observer Book of the Week

When Taliban forces took Kabul on 15 August 2021, it marked the end of the Western intervention that had begun nearly twenty years earlier with the US-led invasion.

The fall of Afghanistan triggered a seismic shock in the West, where US President Joe Biden announced an end to America’s involvement in conflicts overseas. In Afghanistan itself it produced terror for the future for those who had worked with and grown up under the coalition-supported administration.

Now, with the country spiralling into economic collapse and famine, Losing Afghanistan is a plea for us to keep our gaze on the plight of the people of Afghanistan and to understand how action and inaction in the West shaped the fate of the nation.

Why was Afghanistan lost? Can it be regained? And what happens next? Edited by international development expert Brian Brivati, this collection of twenty-one essays by analysts, politicians, soldiers, commentators and practitioners – interspersed with powerful eyewitness testimony from Afghan voices – explains what happened in Afghanistan and why, and what the future holds both for its people and for liberal intervention.

"This book provides a really valuable snapshot of the mess that President Biden chose to create, in a country that was entirely dependent on his whims."

“Those who wonder how the international community failed so dramatically in Afghanistan need look no further. This selection of essays makes sombre reading. The differing points of view demonstrate the complexity of the challenge. Losing Afghanistan explores the arguments for and against intervention and highlights the difficulty of establishing unity of purpose and effort in such demanding circumstances. Above all, it poses a question: how can we in the West claim we know so much, yet demonstrate in Afghanistan that we understand so little?”

“A wonderful book of insightful essays on Afghanistan from an outsider lens.”

“The efforts to solve the immense and complex problems in Afghanistan may have often been misdirected, but failure was not guaranteed. Unfortunately, the peace negotiations, leading to the inappropriate haste of withdrawal, fatally undermined the population’s confidence, catalysing the untimely collapse of the government. The strategic question posed by these brilliant essays is: how can the doctrine of liberal intervention be reframed to ensure the West intervenes overseas to manage future humanitarian calamities for reasons beyond just national security?”