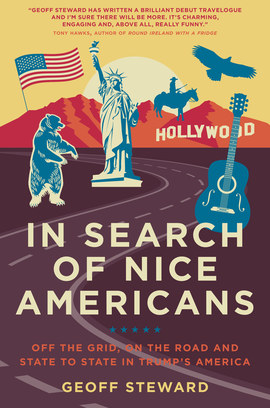 In Search Of Nice Americans Off-grid, on the road and state to state in Trump’s America

Turning his back on the British legal profession and the requirement to account for every six minutes of his time, Geoff Steward and his lucky five-inch articulated Doctor Who figure go off-grid and on the road across America. From New York to Alaska, he tries to fend for himself without his trusty PA and life support, the unflappable Charmaine, for whom contentment lies in Jesus Christ and custard creams.

With his blend of waspish wit and mischievous charm, Steward seeks out normal Americans, such as Joe le Taxi, the former NYPD officer who was one of the first on the scene at the Twin Towers and now runs an extortionate executive taxi service; Pam and Bob, a paranoid psychiatrist and a failed actor who once saw the back of Meryl Streep’s head; Taylor the Alaskan bushwhacker who was raised by wolves and revels in their scat; Jeb the Yosemite inn-sitter who lives his life at the pace of a Ford Model T; Kacey Musgraves, the controversial country music star staying at the same farm in Tennessee; and Sheriff Duke of Calhoun County, South Carolina, who reintroduces Steward to the long (and armed) arm of the law.

For anyone at a crossroads, contemplating a temporary or permanent career break, this affectionate travel romp is essential reading. Journeying coast-to-coast across the US with Steward might just remind you that, despite the post-Trump hysteria, there are many normal and decent Americans out there.

Geoff Steward has written a brilliant debut travelogue and I’m sure there will be more. It’s charming, engaging and, above all, really funny.

Tony Hawks, author of Round Ireland with a Fridge

Steward’s ear for humour in the mundane makes for a rewarding read…he writes with a light touch, each vignette moving at pace – and in places laugh-out-loud funny.

Steward has been described as ‘Bill Bryson gone bad’. Very true. He has the same light charm and ability to transport the reader elsewhere, but with cutting and observational humour. There are times when, if you read it in public, you will be trying to hold in your laughter.