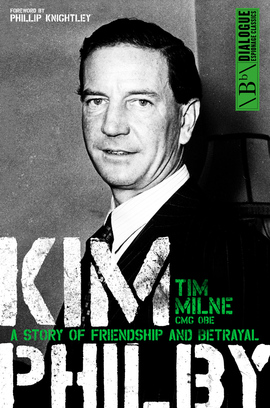 Kim Philby A story of friendship and betrayal

Kim Philby, the so-called Third Man in the Cambridge spy ring, was the Cold War’s most infamous traitor. A Soviet spy at the heart of British intelligence, at one point heading up the section tasked with rooting out Russian spies within MI6, he betrayed hundreds of British and US agents to the Russians and compromised numerous operations inside the Soviet Union.

Ian Innes ‘Tim’ Milne was Phiby's closest and oldest friend. They studied at Westminster School together and when Philby joined MI6 he immediately recruited Milne as his deputy. Philby’s treachery was a huge blow to Milne and, after he retired, he wrote a highly revealing description of Philby’s time in the secret service. Publication of the memoirs was banned by MI6 but, after Milne’s death in 2010, his family were determined that this insider’s account of the Philby affair be published.

Edited to include newly released top-secret documents showing how the KGB’s ‘master spy’ managed to fool MI6 even after he defected to Moscow, this is the final word on one of the world’s most notorious spies by the MI6 colleague who knew him best, the insider account of the Philby affair that Britain’s spy chiefs did not want you to read…

Elegant and rich in detail, it provides intriguing glimpses of the man who would become the 20th century's most notorious British spy and traitor.

[Milne] explains one of the most enduring mysteries surrounding the notorious Soviet spy.

The demons which drove the proudly English Kim Philby to betray his country, its people and especially his MI6 colleagues have never before been so intimately examined and explained. A fascinating look into the mind of a tragic figure by his oldest and closest friend.

Chapman Pincher, author of Their Trade Is Treachery and Dangerous To Know

A fascinating, very personal account of Philby’s treachery from his SIS colleague, teenage travelling companion and schoolboy friend who was left utterly betrayed. This is a unique insight from an insider.

Nigel West, author of The Crown Jewels and Operation Garbo

An often intimate portrait of the Third Man, candid in its assessments.

There are some good anecdotes here - the cricketing recollections are Milne’s - and some interesting suggestions that Philby wasn’t such a big boozer as he’s usually cracked up to be. Was this a pretence too? Yet what stands out above all is just how little bitterness Milne felt. Philby, he wrote, ‘enriched my world for many years’, and Milne clearly didn’t want anything, not even treachery, to soil the memory of that: ‘I do not feel bitterness towards him, only sadness.’

Tim Milne's finely written and refreshingly unhysterical book... Milne gives fascinating and revealing accounts of his friend's behaviour and attitudes. It might seem that by now Philby as a subject had been done to death, but as these two books amply illustrate, he is still a source of fascination and wonderment.

The book offers a fascinating glimpse of the charismatic Philby.

A workmanlike, honest account that unpeels a lifetime’s friendship with the man whose treachery cost thousands of lives.

Milne’s account of Philby is full of delightful trivia, but there is personal insight too.