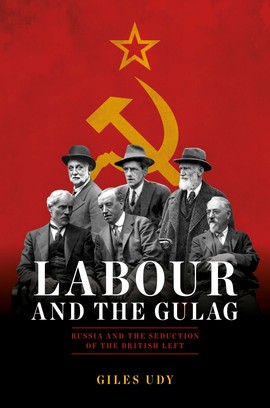 The Labour Party welcomed the Russian Revolution in 1917: it paved the way for the birth of a socialist superpower and ushered in a new era in Soviet governance. Labour excused the Bolshevik excesses and prepared for its own revolution in Britain.

In 1929, Stalin deported hundreds of thousands of men, women and children to work in labour camps. Subjected to appalling treatment, thousands died. When news of the camps leaked out in Britain, there were protests demanding the government ban imports of timber cut by slave labourers.

The Labour government of the day dismissed mistreatment claims as Tory propaganda and blocked appeals for an inquiry. Despite the Cabinet privately acknowledging the harsh realities of the work camps, Soviet denials were publicly repeated as fact. One Labour minister even defended them as part of ‘a remarkable economic experiment’.

Labour and the Gulag explains how Britain’s Labour Party was seduced by the promise of a socialist utopia and enamoured of a Russian Communist system it sought to emulate. It reveals the moral compromises Labour made, and how it turned its back on the people in order to further its own political agenda.

“Giles Udy’s book is a scholarly and passionate indictment of Labour’s complicity with Soviet oppression. Investigating new archives, this is an important book on how a ‘progressive’ approach to foreign policy can conceal systematic murder on a vast scale.”

'It might be a pretty grim choice for holiday reading but Giles Udy’s Labour and the Gulag offers a fascinating account of how the Soviet Union enjoyed the backing of the British Labour Party between the Russian Revolution and the Second World War.'

“Giles Udy has written a compelling work of history – at once scrupulous, angry and humane. He tells the story of Soviet barbarism and the British Labour Party’s compromised response to Stalin’s outrages with a masterly eye for detail and an unflinching commitment to the truth. This history reminds us all of the vital need to maintain a clear-eyed and robust approach towards regimes which deny their people liberty and it underlines how much the Labour Party has depended on sensible working-class voices such as Ernest Bevin to stay on the side of progress.”

“Enormous efforts continue to be made to ensure the evils of Nazism are not forgotten – and rightly so. In contrast, little is done to educate people about the nature and scale of Communism’s horrors. And while Nazism’s most prominent appeasers remain infamous, even to this day, those who repeatedly excused Communism’s excesses or even pretended they didn’t exist at all have been spared judgement. This book changes that – at least for Britain’s left. Giles Udy’s masterpiece records the evils committed under that bloody red flag kept ‘flying here’ and the fellow travelling of large numbers of leading Labour politicians.”

“In Giles Udy’s meticulous account of the British left’s attitude to Bolshevik terror in Russia and elsewhere, villains abound, and not just among the murderous zealots in Moscow. He leaves the interwar Labour movement, and its latter-day defenders, sizzling on a skewer.”

"A fascinating account of how the Soviet Union enjoyed the backing of the British Labour Party between the Russian Revolution and the Second World War."

"Giles Udy’s remarkable work explores in minute detail the romantic enthusiasm of the British Left for Bolshevism. This timely book, marking the centenary of this upheaval, recreates the political atmosphere that permeated Parliament, dominated by Labour during the key years. Udy’s research here is deeply impressive."

Bevin’s point was that his own party had often failed to stand by this principle when confronted with the horrors of Soviet communism – a history of evasion and wilful blindness meticulously and incontestably chronicled in Giles Udy’s magisterial Labour and the Gulag.