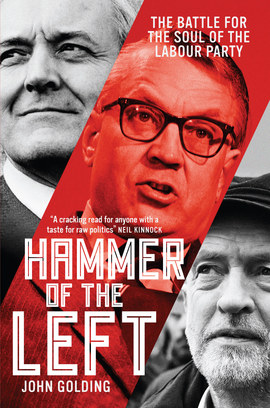 “We went into the general election with an unelectable leader, in a state of chaos with a manifesto that might have swept us to victory in cloud cuckoo land, but which was held in contempt in the Britain of 1983.”

It is said that those who do not learn from past mistakes are doomed to repeat them, and though Golding was describing the Labour Party of the early 1980s, he could just as easily have been talking about its situation today.

A lurch to the left and a party in turmoil — the ascension of Jeremy Corbyn as Labour leader will, for many, trigger only unhappy memories of the dark days of the 1970s and ’80s, when the party was plagued by a civil war that threatened to end all hopes of re-election.

In that battle, moderate elements fought the illiberal hard left for the soul of Labour; that they won, paving the way for later electoral successes, was down to men and women like John Golding.

In this visceral, no-holds-barred account, Golding describes how he took on and helped defeat the Militant Tendency and the rest of the hard left, providing not only a vivid portrait of political intrigue and warfare, but a timely reminder for the party of today of the dangers of disunity and of drifting too far from electoral reality.

“A cracking read for anyone with a taste for raw politics.”