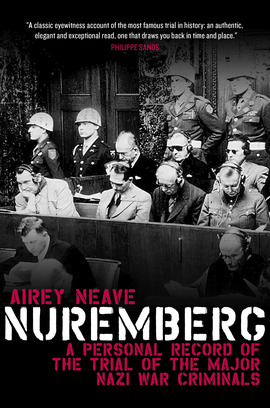 In 18 October 1945, a day that would haunt him for ever, Airey Neave personally served the official indictments on the twenty-one top Nazis awaiting trial in Nuremberg – including Hermann Goering, Rudolf Hess and Albert Speer. With his visit to their gloomy prison cells, the tragedy of an entire generation reached its final act.

The 29-year-old Neave, a wartime organiser of MI9 and the first Englishman to escape from Colditz Castle, had watched and listened over the months as the trials unfolded. Here, he describes the cowardice, calumny and in some cases bravado of the defendants – men he came to know and who in turn would become known as some of the most evil men in history.

A milestone in international law, the Nuremberg trials prompted uncomfortable but vital questions about how we prosecute the worst crimes ever committed – and who is entitled to deliver justice. Challenging, poignant and incisive, this definitive eyewitness account remains indispensable reading today.

Read the original foreword to the book, by Dame Rebecca West, here.

"A classic eyewitness account of the most famous trial in history: an authentic, elegant and exceptional read, one that draws you back in time and place."

"With the postwar international order under increasing strain, Airey Neave's haunting account of the Nuremberg trial is more relevant than ever. The extraordinary access he had to those accused of monstrous evil gives added power to his timeless message: that if the rule of law is to mean anything, there must be no impunity for those who commit war crimes and crimes against humanity."