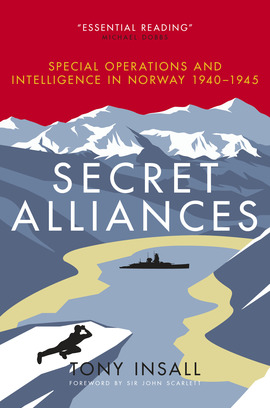 EUROPE, 1940. NAZI FORCES SWEEP ACROSS THE CONTINENT, WITH A BRITISH INVASION LIKELY ONLY WEEKS AWAY. NEVER BEFORE HAS A RESISTANCE MOVEMENT BEEN SO CRUCIAL TO THE WAR EFFORT.

In this definitive appraisal of Anglo-Norwegian cooperation in the Second World War, Tony Insall reveals how some of the most striking successes of the Norwegian resistance were the reports produced by the heroic SIS agents living in the country’s desolate wilderness. Their coast-watching intelligence highlighted the movements of the German fleet and led to counter-strikes which sank many enemy ships – most notably the Tirpitz in November 1944.

Using previously unpublished archival material from London, Oslo and Moscow, Insall explores how SIS and SOE worked effectively with their Norwegian counterparts to produce some of the most remarkable achievements of the Second World War

“A fascinating and novel insight into British intelligence and special operations in wartime Norway. Among a number of important new sources, Tony Insall has discovered in Oslo top-secret SIS files which are unavailable in Britain.”

Professor Christopher Andrew, founder of Cambridge University Intelligence Seminar and author of The Secret World: A History of Intelligence

“This is a beautifully detailed account that brings to life the extraordinary story of the Norwegian resistance. So many played their part – kings, prime ministers, traitors like Kim Philby – but mostly this is a tale of bloody-minded determination on the part of unsung heroes. It is essential reading for anyone who wants to understand this vital period of Norwegian history.”

“A fascinating account of Anglo-Norwegian cooperation in the heroic struggle against German occupation.”

“The most detailed and comprehensive study of wartime clandestine operations conducted in Norway yet published. Highly readable and thoroughly researched.”

“Some of the most important links between Britain and Norway during WWII were welded through the vast and varied numbers of clandestine operations undertaken by SOE and SIS. Here, Tony Insall describes these activities against the complex political backdrop – whilst drawing upon a thorough understanding of Norway – to add considerably to our knowledge on the subject.”

“Secret Alliances is a gripping history of wide-ranging Anglo-Norwegian wartime cooperation, spiced with vivid stories of heroism and betrayal. Tony Insall makes unprecedented use of British and Norwegian archives to present a detailed picture of resistance operations in Norway, and also explains the political context that facilitated what was perhaps the most effective resistance movement in occupied Europe.”

Patrick Salmon, Chief Historian at the Foreign and Commonwealth Office

“Secret Alliances shines a light on a fascinating but little-known part of the war. Filled with new details and insight, it brings to life the drama of special operations and intelligence work in Norway, including the extent of SIS coast-watching, which provided significant coverage of the German fleet, especially the Tirpitz.”

Gordon Corera, broadcaster and author of MI6: Life and Death in the British Secret Service

“Tony Insall’s account and analysis is well-written and well-researched and contains many new insights and new details … The book is undoubtedly essential, even indispensable, reading for anyone who is interested in Anglo-Norwegian relations and how it most likely made a substantial contribution to the Second World War as a global maritime conflict.”

“Brings some clarity to a complex picture of codenamed operations and agents … [a] meticulous and enjoyable account.”

“Tony Insall draws on new archive material to provide an authoritative perspective on some of the most remarkable operations of the Second World War.”

Secret Alliances is a "thorough, authoritative and probably definitive account" of "the successes and failures of UK-Norwegian collaboration".

A Spy Called Cynthia
Lessons From History
The Father: A Revenge
Two Minutes to Midnight