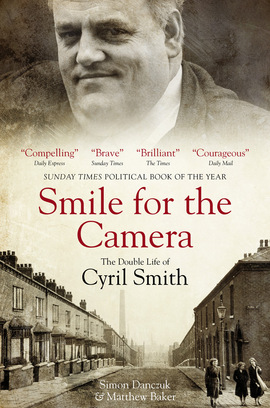 Smile for the Camera The Double Life of Cyril Smith

By Matthew Baker and Simon Danczuk

No politician pandered to the media’s appetite for personality more than Liberal MP Cyril Smith. Instantly recognisable for his colossal build, Smith was a larger-than-life character in a world of dull grey men. Yet ‘Big Cyril’ was anything but the roly-poly gentle giant of popular imagination.

In November 2012, Rochdale MP Simon Danczuk outed Smith in Parliament as a serial child abuser. Now, in this devastating exposé, he describes how Smith used his profile to groom and sexually abuse young boys, frequently in institutions he had helped to establish. His victims, often troubled boys from broken homes, had no voice against their attacker and, though rumours abounded, Smith’s appalling crimes went unnoticed by the public and unpunished by the authorities.

Smile for the Camera is not just about a terrible abuse of power. It’s about those who knew that abuse was taking place but looked the other way, making the corridors of Westminster a safe haven for paedophiles like Cyril Smith. This updated edition of the book that sparked a criminal investigation brings shocking new material to light, asking urgent questions of those who allowed Smith to prey on young children for decades without question

Mr Danczuk's courageous book has opened up a stinking can of worms and it seems clear that only a proper judicial investigation can uncover the whole unsavoury truth.

In this compelling book... Danczuk revealed how the authorities systematically covered up sickening sexual exploitation of boys by Sir Cyril over decades.

This is an extremely good book, and a brave one, too.

This important book should be read by all those charged with delivering criminal justice, by all those interested in politics, but most importantly by those in every community motivated by a healthy and unstinting scepticism of authority.

‘A brilliant piece of journalism and Danczuk is to be applauded for venturing where few have dared to tread.’

[A] brave, disturbing, in many ways brilliant book.

Must Reads, Our Choice of the Best Recent books: ‘a brave study of the lies and cover-ups’

A bold and genuine attempt to fill in some of the gaps in the myth of Smith… The Danczuk-Baker book merits close attention.