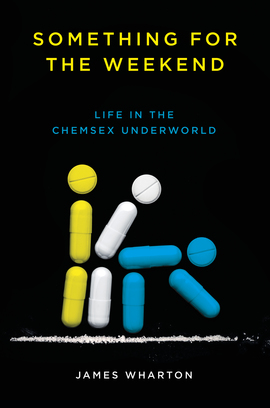 Something For The Weekend Life in the Chemsex Underworld

When James Wharton leaves the army, he finds himself with more opportunities than most to begin a successful civilian life – he has a husband, two dogs, two cars, a nice house in the countryside and a book deal.

A year later he finds himself single, living in a room and trying to adjust to single gay life back in the capital. In his search for new friends and potential lovers, he becomes sucked into London’s gay drug culture, soon becoming addicted to partying and the phenomenon that is ‘chemsex’.

Exploring his own journey through this dark but popular world, James looks at the motivating factors that led him to the culture, as well as examining the paths taken by others. He reveals the real goings-on at the weekends for thousands of people after most have gone to bed, and how modern technology allows them to arrange, congregate, furnish themselves with drugs and spend hours, often days, behind closed curtains, with strangers and in states of heightened sexual desire.

Something for the Weekend looks compassionately at a growing culture that’s now moved beyond London and established itself as more than a short-term craze.

"Absolutely brilliant. Terrifying and timely. An absolute eye-opener for a non-sane gay like me who was aware that this chemsex world had emerged over the last decade or so but knew nothing about it. The book is so honest and so unflinching, but comes from a loving and understanding place. This gives it real power and authority."

"An unflinching and vital new contribution to the on-going discussion about gay men, addictive behaviour, mental health and self-care […]a clear, considered and non-judgmental book."

Out In The Army
Equal Ever After
Gay Shorts
True Colours