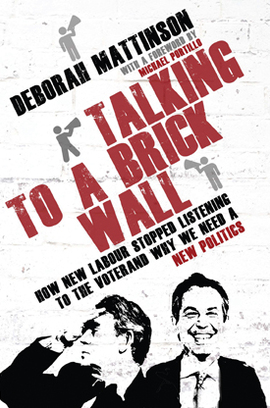 With a foreword by Michael Portillo. Deborah Mattinson had a unique perspective on the New Labour project. As Britain’s leading political pollster, she has been monitoring public opinion since the mid-1980s, and helped transform Labour into Europe’s greatest election-winning machine of the modern era. As chief pollster to Gordon Brown during his premiership, she has been at the very heart of electoral politics, consistently representing the voter’s side of the story to the politicans. Sometimes she has encountered scepticism – a belligerent John Smith made an unappreciative witness to one of Deborah’s focus groups – and she has often had to deliver unwelcome results. Telling a grumpy Gordon Brown he needed to spruce up his appearance cannot have been easy. With a stellar cast, including Neil Kinnock, Peter Mandelson, John Smith, Tony Blair and Gordon Brown, Talking to A Brick Wall reviews the New Labour years from the voter’s point of view. It tracks the ups and downs of the Blair/Brown era as seen from beyond Westminster, showing how closely political reputation correlates with voter connection. It profiles the swing voter, shows the importance of women’s votes, and what gives a politician popular appeal, and maps the voters’ views through the 2010 campaign and its immediate aftermath. It shows how the electorate has been left out of political decision making and reveals the public’s recipe for rehabilitating the Labour Party and rebuilding trust in democracy. A champion of democratic renewal through citizen engagement, Deborah Mattinson believes that we must move to new grown up partnership politics if democracy is to thrive.

’Mattinson’s engaging fly-on-the-wall tale of life as Brown’s favourite pollster. She had a ringside seat to observe the flawed characters of Tony Blair and Brown and their henchmen: Peter Mandelson and Alastair Campbell.’ – John Kampfner, The Sunday Times

‘Rather good!’ – Daniel Finkelstein, The Times

‘Contains more insight and less bile than many memoirs’ – Andrew Sparrow, The Guardian.

‘I was only trying to boost sales!’ – David Cameron in PMQs

‘Deborah Mattinson’s book goes beyond the soap opera of New Labour to explain its inner mechanics, the decline of the Brown years and – crucially – what the public really thought. A very important and hugely intelligent political text, and a must-read for anyone with an interest in how politics and popular opinion interact.’ – Matthew d’Ancona, Evening Standard

‘Her passion for her trade radiates throughout… compelling’ – Peter Kenyon, Chartist Magazine