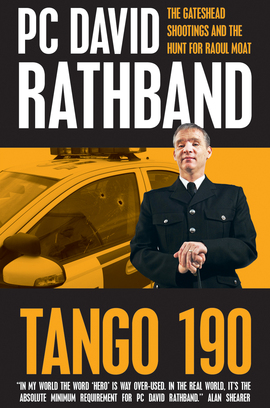 ‘In my world the word hero is way over-used. In the real world, it’s the absolute minimum requirement for PC David Rathband.’ – Alan Shearer

‘PC David Rathband’s detailed step-by-step description from the life changing moment he was shot at close range in the face and how he survived and, with great determination and courage, faced the future is emotional and traumatic. Yet his courage and humour in looking forward to life without sight and forming the Blue Lamp Foundation is uplifting and inspiring. If you read only one book this year, read this one. I highly recommend it.’ – Duncan Bannatyne OBE

‘I need hardly say that we have the most enormous admiration for the extraordinary resilience and courage you have displayed. The United Kingdom owes a huge debt of gratitude to policemen like yourself who are prepared to sacrifice so much for others in the line of duty.’ – HRH The Price of Wales

‘David bowled me over at the Daily Mirror’s Pride of Britain awards last year. He is simply remarkable. He searched for the hero inside himself and was not found wanting. To know his story and to read this book will show you how the world is a better place for him being in it. David is also one of the most cheeky men I’ve ever met, so be warned! Marvellous.’ – Carol Vorderman

On 1 July 2010 Raoul Moat was released from Durham Prison. Within forty-eight hours he had shot his ex-partner Samantha Stobbart and brutally murdered her new boyfriend, Chris Brown. In the early hours of 4 July Police Constable David Rathband was gunned down while sitting in his patrol car in East Denton, just outside Newcastle-upon-Tyne. PC Rathband was blinded for life and one of the biggest manhunts in police history began, culminating in Moat’s death six days later in the small Northumberland town of Rothbury. For the first time, this is PC David Rathband’s story in his own words… The extraordinary events that followed PC Rathband’s shooting, as police tracked Moat through towns and countryside, dominated the headlines and became one of the biggest and most controversial news stories of recent times. Often bordering on the ridiculous, it featured unexpected cameos from TV survival expert Ray Mears and former England footballer Paul Gascoigne. It ended with a stand-off between Moat and armed police on the banks of the River Coquet in Rothbury. In the middle of it all was PC David Rathband, a dignified presence throughout. Tango 190 is his personal account of the attack, and the events surrounding it. It is also the story of his physical recuperation and the gradual and courageous rebuilding of his life, with the help of his family, in the wake of terrible injuries sustained in the line of duty. PC David Rathband’s courage, fortitude and good humour in the light of his horrifying ordeal are extraordinary. This book tells David’s own story, and it is truly a remarkable one.