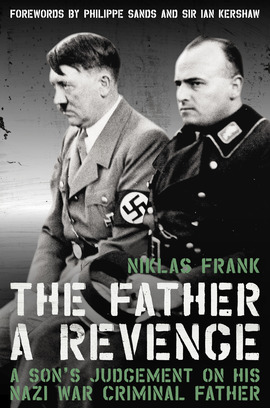 The Father: A Revenge A son’s judgement on his Nazi war criminal father

Niklas Frank was just seven years old when his father, Hans Frank, Hitler’s legal adviser and Governor General of occupied Poland, was executed at Nuremberg as a Nazi war criminal. Throughout his life, Niklas has attempted to come to terms with the enormity of the crimes his father committed, and this remarkable book traces how after years of research he uncovered the extent of the horror unleashed by the man who was known as the butcher of Poland.

The Father is an extraordinary account of a scarred son struggling to comprehend the depravity of the acts that were committed by his father. Whereas other descendants of Hitler’s henchmen and co-collaborators have tried to explain or to forget the crimes of their forebears, Niklas’s disgust for his father’s actions is unremitting. This book is his attempt to seek revenge.

Featuring forewords by Philippe Sands and Sir Ian Kershaw, The Father is by turns shocking, twisted and heart-rending; a devastating settling of accounts written by a son addressing his father as he pictures him burning in the eternal fires of hell.

"This is a unique account of Nazi horror from one who has suffered lasting repercussions by being so close to one of its arch-perpetrators - his father. It is a book that deserves to be read. It is hard to think of a more vivid depiction of the sordid power-lust, corruption, depravity, and despotism that followed inexorably on the contemptuous destruction of legality and human rights that took place in Hitler’s regime."

"Reading The Father was a transformative act, one that opened new doors and possibilities. In its own way, and with its particular style, it is amongst the most significant books I have ever read. It is no less important a work today than when it was first published, or when the terrible events it touches upon took place."

"The astonishing, visceral memoir of a son grappling with guilt about his war criminal family"

"It is a difficult read. But nonetheless a revelatory one."