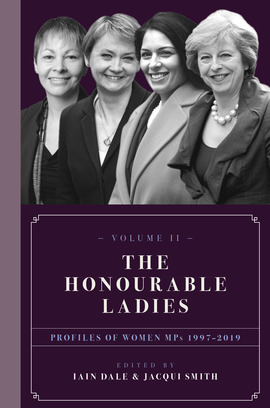 Biteback Publishing is delighted to announce a major new project, a two volume series of biographies of every female MP ever to be elected to the House of Commons.

When Constance Markievicz stood as the Sinn Féin candidate for Dublin St Patrick’s in 1918, few people believed she would win the election to become the first woman MP – but she did. Now, just over 100 years later, women following the path she paved are increasingly winning, and filling, the hallowed seats of Parliament.

The past two decades have seen more and more women stepping up to fight for the interests of their constituents and redressing the unequal gender balance in the Commons. Since the huge influx of female Labour MPs with the election of Tony Blair (unfortunately referred to as ‘Blair’s Babes’), there are now women standing for a wide range of parties across the political spectrum. Alongside the ever-growing representation of BAME members in Parliament, these women are revolutionising Britain’s political landscape like never before.

Highlighting the profiles of each woman MP elected from 1997 to 2019, and written by an impressive array of solely female contributors, such as Emily Thornberry, Edwina Currie, Ayesha Hazarika, Natalie Bennett and Dia Chakravarty, The Honourable Ladies: Volume II is the second instalment in a compelling and comprehensive project to honour the lives and achievements of these unforgettable women.

The Honourable Ladies: Volume I
My Hair Is Pink Under This Veil
May at 10
Ladies Who Punch