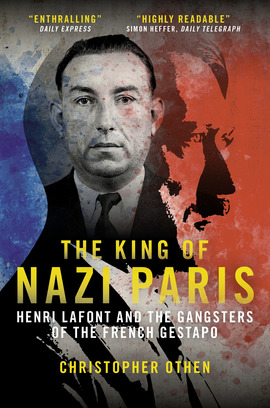 By 1943, Henri Lafont was the most powerful Frenchman in occupied Paris. Once a petty criminal running from the French police, when he found himself recruited by the Nazis his life changed for ever.

Lafont established a motley band of sadistic oddballs that became known as the French Gestapo and included ex-footballers, faded aristocrats, pimps, murderers and thieves. The gang wore the finest clothes, ate at the best restaurants and threw parties for the rich and famous out of their headquarters on the exclusive rue Lauriston.

In this vivid portrait, Christopher Othen explores how Lafont and his criminal clan rampaged across Paris through the Second World War – until the Allies liberated France, and a terrible price had to be paid.

‘A gruesome exposé of the 1940s French gangsters who did the Gestapo’s dirty work … Othen tells the story of these repulsive men and their exploits with brio … he captures their sordid milieu perfectly.’

‘Enthralling … the incredible story of how Chamberlin went from eating out of dustbins to becoming the King of Nazi Paris, with money to burn and a whole host of beautiful ladies falling at his feet.'

"Othen captures the seediness and amorality of Lafont, his men and occupied Paris and makes you thank God that Britain never had to experience the Grand Guignol of Nazi occupation."

A Spy Called Cynthia
Lessons From History
The Father: A Revenge
Secret Alliances