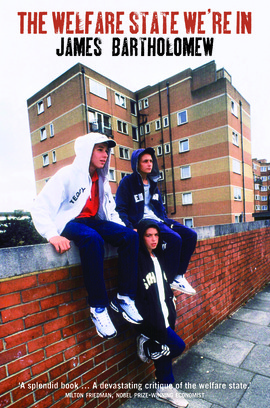 The Welfare State We're In

The welfare state is one of Britain’s crowning achievements. Or is it? In this seminal book, now studied in universities in Britain and elsewhere, James Bartholomew advances the sacrilegious argument that, however well meaning its founders, the welfare state has done more harm than good.
He argues that far from being the socialist utopia the post-war generation dreamed of, the welfare state has led to avoidable deaths in the NHS, falling standards in schools, permanent mass unemployment and many other unintended consequences. At a deeper level, he contends that the welfare state has caused millions to live deprived and even depraved lives, undermining the very decency and kindness which first inspired it.
This landmark book changed the way many people think about the welfare state. It played a major role in the political debate that led to recent reforms. Now with a new introduction by the author assessing the value of these reforms, this classic text still shocks with the power of its arguments and the weight of its supporting evidence.

This isn’t a dry book about public policy. It’s an explosive blockbuster, guaranteed to boil your blood, beautifully written, sweeping in its scope. There are many bad things about modern Britain. Until I read this book, they seemed disconnected, hard to explain, impossible to put right. That’s why it is such an exciting read. Bartholomew’s message, that the welfare state has done much to destroy liberal society in the West, is scary, but it’s also thrilling. For in articulating the problem so clearly, he shows us how to solve it.

Overall The Welfare State We’re In is a fascinating read which sets our modern-day welfare state in its historical context and challenges many assumptions which are frequently made about it.

No more effective indictment of the welfare state has been published than that which appears between the covers of James Bartholomew’s The Welfare State We’re In. The book is quite simply brilliant.

A splendid book … A devastating critique of the welfare state.

The Little Green Book of Eco-Fascism
The Welfare Of Nations
Europe: In Or Out?
Enoch at 100
Watermelons