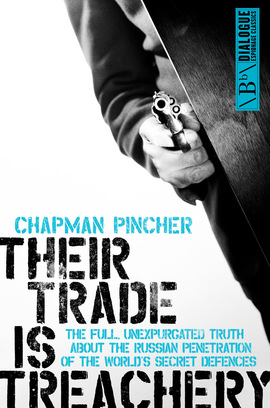 Their Trade is Treachery The full, unexpurgated truth about the Russian penetration of the world's secret defences

Harry Chapman Pincher is regarded as one of the finest investigative reporters of the twentieth century. Over the course of a glittering six-decade career, he became notorious as a relentless investigator of spies and their secret trade, proving to be a constant thorn in the side of the establishment. So influential was he that Prime Minister Harold Macmillan once asked, ‘Can nothing be done to suppress Mr Chapman Pincher?’

It is for his sensational 1981 book, Their Trade is Treachery, that he is perhaps best known. In this extraordinary volume he dissected the Soviet Union’s infiltration of the western world and helped unmask the Cambridge Five. He also outlined his suspicions that former MI5 chief Roger Hollis was in fact a super spy at the heart of a ring of double agents poisoning the secret intelligence service from within.

However, the Hollis revelation was just one of the book’s many astounding coups. Its impact at the time was immense and highly controversial, sending ripples through the British intelligence and political landscapes. Never before had any writer penetrated so deeply and authoritatively into this world – and few have since.

Available now for the first time in thirty years, this eye-opening volume is an incomparable and definitive account of the thrilling nature of Cold War espionage and treachery.

It also was, and is, a fascinating examination of the day-to-day practice of espionage, straight from the pages of a spy novel.