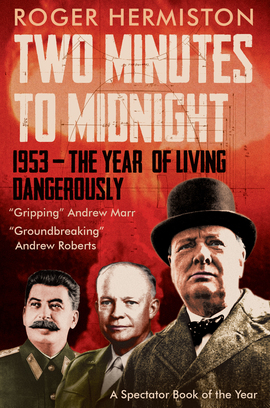 Two Minutes to Midnight 1953 – The Year of Living Dangerously

A SPECTATOR BOOK OF THE YEAR – ‘a dark remembrance of 1953, when nuclear annihilation was only the press of a button away’.

January 1953. Eight years on from the most destructive conflict in human history, the Cold War enters its deadliest phase. An Iron Curtain has descended across Europe, and hostilities have turned hot on the Korean peninsula as the United States and Soviet Union clash in an intractable and bloody proxy war.

Former wartime allies have grown far apart. An ageing Winston Churchill, back in Downing Street, yearns for peace with the Kremlin – but new American President Dwight Eisenhower cautions the West not to drop its guard. Joseph Stalin, implacable as ever, conducts vicious campaigns against imaginary internal enemies.

Meanwhile, the pace of the nuclear arms race has become frenetic. The Soviet Union has finally tested its own atom bomb, as has Britain. But in the middle of the Pacific Ocean, the United States has detonated its first thermonuclear device, dwarfing the destruction unleashed on Hiroshima and Nagasaki.

For the first time, the Doomsday Clock is set at two minutes to midnight, with the risk of a man-made global apocalypse increasingly likely. As the Cold War powers square up, every city has become a potential battleground and every citizen a target. 1953 is set to be a year of living dangerously.

“A page-turning account of an epoch-changing year, with unexpected portraits and gripping narrative details. Popular history at its best.”

“For far too long, 1953 has been thought of as a monochrome year; just another twelve months in the boring 1950s. Now Roger Hermiston explodes that theory by showing it in all its most vivid colours, presenting it in a way that will ensure that it will be appreciated as a true turning point in modern history. His gripping account of the death of Stalin, the discovery of DNA, Winston Churchill’s stroke, Dwight Eisenhower’s presidency and so much more will stay with readers long after they finish the last page of this well-researched, thoughtful, well-written and groundbreaking book.”

“This prescient book evokes the feeling of a world on the brink.”

“A fascinating account of a remarkable year. Roger Hermiston builds a compelling, and eminently readable, case for the view that 1953 was a pivotal year, a turning point in the Cold War and in the creation of the world we still inhabit today.”

“Hermiston sets out to rescue 1953 from its status in popular history as ‘one of the monochrome’ years in the early Cold War and succeeds admirably … an accessible, lucid and absorbing book.”