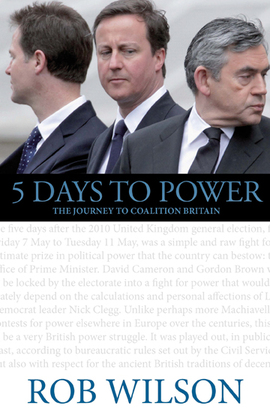 5 Days to Power The Journey to Coalition Britain

With unique access to key figures involved from all three political parties Rob Wilson MP tells the story of the coalition talks in a manner and depth in which it has not been told before. In 5 Days to Power Rob Wilson sheds further light and answers questions to which the negotiators themselves would have dearly loved to know the answers, including:

• Which concessions were necessary to persuade the other party to agree to a full coalition?
• What was Labour offering in their bid to stay in power, and could they have delivered?
• What was said in the one-to-one meetings between the party leaders?
• When was the Liberal Democrat decision to do the deal with the Conservatives actually taken?

5 Days to Power gives the first full account of the negotiations that led to the political earthquake of a Conservative and Liberal Democrat coalition government.