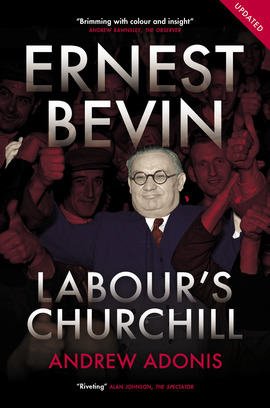 Statesman, pre-eminent leader and founder of the free world’s then largest and most formidable trade union, Ernest Bevin was one of the most rousing figures of the twentieth century. Minister of Labour in the wartime coalition during the Second World War, he was Churchill’s right-hand man, masterminding the home front while the war supremo commanded the battle front. Afterwards, he was Foreign Secretary at one of the most critical moments in international history, responsible for keeping Stalin and communism out of Western Europe, and for creating West Germany, NATO and the transatlantic alliance, all of which underpin European democracy and security to this day.

An orphan farm boy from Bristol, Bevin’s astonishing rise to fame and power is unmatched by any leader to this day. In this discerning and wide-ranging biography, Andrew Adonis examines how ‘the working-class John Bull’ grew to a position of such authority, and offers a critical reassessment of his life and influence. Finally exploring Bevin’s powerful legacy and lessons for our own age, Adonis restores this charismatic statesman to his rightful place among the pantheon of Britain’s greatest political leaders.

An excellent book which rescues Bevin from ‘the condescension of posterity’, capturing an extraordinary political figure.

“Far more people, in my experience, have heard of Bevan than Bevin. Luckily, with this timely biography, Andrew Adonis restores Bevin to his rightful place as not only a Labour Party legend but a giant of twentieth-century history. In this brilliant and most entertaining portrait, Adonis demonstrates the qualities of historian and experienced politician that have made him one of the most quotable commentators of the day.”

“A biography brimming with colour and insight that brings both the character of the man and his many achievements vividly to life.”

“[It] does a superb job in reintroducing a giant from Labour’s past.”

“As a reintroduction to a forgotten giant this is a fine work... Someone should definitely slip a copy of this book into Keir Starmer’s backpack.”

“Andrew Adonis has done us a great service with this biography, introducing a new generation to one of the most extraordinary lives of the 20th century and one whose legacy lives on to this day. It is not a hagiography, however—the judgments are balanced and well sourced.”

"Bevin's extraordinary origins and path to politics are captured beautifully in Adonis's account."