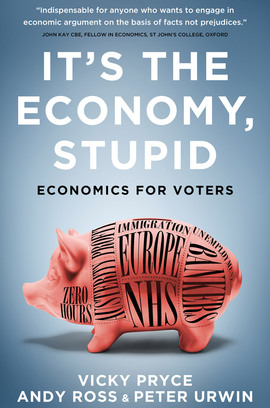 It's the Economy, Stupid Economics for Voters

Pollsters are constantly worrying about our perceptions of politicians. What do their other halves look like? Who looks best when eating a bacon sandwich? Should they even be eating bacon sandwiches in the first place? For the voter, though, it all comes down to one thing: the economy.

While good economic news can send popularity sky-rocketing, bad performance can blight a party's election chances for years. But, with policies often working with time lags, it's rarely clear who is responsible for what - especially when their stances on the biggest issues of the day - immigration, the EU, the NHS - are clouded in rhetoric rather than grounded in hard economic fact.

It's the Economy, Stupid sets out to change all that. This incisive, accessible guide explodes some of the most entrenched myths of British political debate. Does immigration help or harm our economy? Are austerity measures the best way to tackle a financial meltdown? Is the NHS in crisis? With answers to all these questions and more, this is essential reading for anyone who wants to know how their vote will affect their financial future.

You’d struggle to name a more coherent account of the credit crunch, which is impressive considering its complexity.

Indispensable for anyone who wants to engage in economic argument on the basis of facts not prejudices.

This book performs an important public service by throwing analytical light on the big issues.

With so many uncertainties ahead, this book attempts to offer a better understanding of what is myth and what is reality behind the economic challenges facing the UK, which will be hotly debated in the coming months - and beyond.

This book submits a range of potent topics – Europe, immigration, the National Health Service, HS2 and the environment among them – to analysis.

Non-economists (and many economists) would benefit from reading this book. Its calm dissection of the issues and its marshalling of the available evidence are a model of clarity and good sense.

Greekonomics
Prisonomics
Why Women Need Quotas
The Problem With Immigrants