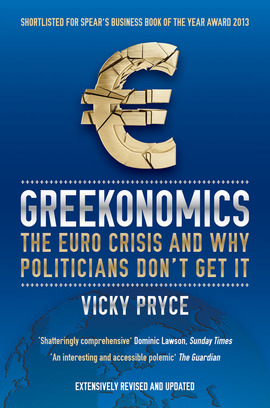 Greekonomics The Euro Crisis and Why Politicians Don’t Get It

Shortlisted for Spear’s Business Book of the Year Award 2013

The eurozone is in crisis. Spiralling debts, defaulting banks, high unemployment – the European dream of a united union appears to be over. All fingers point to the corrupt and greedy PIIGs: Portugal, Ireland, Italy, Greece and Spain. Profligate governments have exploited the system, squandered the benefits and now beg for bail-outs from those that prosper. But is it really that simple?
Economist Vicky Pryce argues that, given the flaws at its conception, the eurozone has been doomed from the very start. Politicians ignored common sense and deliberately created a system based on political not economic motives. It was a recipe for disaster and Europe now reaps the whirlwind.
Is it time for a Greek exit? Now comprehensively revised and updated, Greekonomics explores the history of the eurozone, lays bare the causes of the crisis and suggests a way out of the current mess.

Pryce, a Greek-born economist, does an admirable job of rescuing her homeland from the scurrilous portraits of it that have recently dominated the press...

Her account of the country's institutionalised rottenness...is shatteringly comprehensive.

An interesting and accessible polemic...

A lively and non-technical description of just how we got here with the euro-crisis.

A good read - It has intellectual depth and insider perspective - Flashes of humour - [an]Excellent achievement.

an interesting and accessible polemic

Her account of the country's institutionalised rottenness...is shatteringly comprehensive

She offers three persuasive, if irreconcilable, conclusions unless Germany pays much more: that a Greek exit from the euro is too dangerous; that Greece cannot repay its debts; and that a diet of perpetual austerity risks killing the patient.

Anyone who wishes to know how serious the crisis has been in Greece could do worse than invest in Vicky Pryce’s Greekonomics, which is a riveting read.

The Borisaurus
White Flag?
Clean Brexit
Half In, Half Out