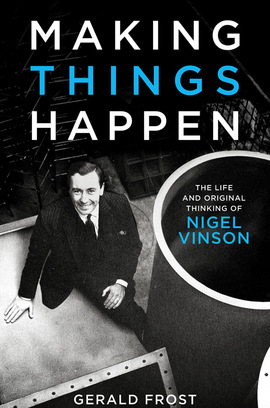 Before he was forty, Nigel Vinson – inventor, entrepreneur, philanthropist and farmer – had achieved what many struggle to achieve in a lifetime. He had created and built up a successful company based on his own ideas, floated it on the stock exchange and made more than enough money to never have to work again.

But, instead of retiring, Vinson forged a unique career in British public life as he sought to find answers to the daunting political and economic problems confronting Britain. This was partly achieved through the wider application of ideas he had developed when running his own business, but also by helping, funding and cooperating with others he judged capable of making a contribution to the country’s recovery. We have it on the authority of Margaret Thatcher herself that Thatcherism would never have happened without the Centre for Policy Studies – the think tank Vinson helped her establish.

This biography tells the story of a man whose influence, both direct and indirect, has been considerably greater than is widely realised. He is a man who saw through the fashionable shibboleths of his day but was often ahead of the trend; a man whose ‘do as you would be done by’ moral philosophy, enormously practical nature and infectious enthusiasm have been fundamental to his continued success.

Nigel Vinson is a man who has made things happen – and he continues to do so to this day.

This is the story of a gifted man. It has been my pleasure to work with him over the years. Discussing a huge variety of shared interests – which this book reveals – has been greatly rewarding, as I hope it will be to others.

Nigel Vinson was an influential Thatcherite whose role in helping to reverse the direction of British politics has not, until now, been properly recognised. Entrepreneurial, dynamic, inventive, practical, patriotic, robust and optimistic, Vinson possesses in abundance those aspects of the national character.

Nigel Vinson has a mind like a rapier, searching out the potential of new ideas and evaluating them. I would have loved to have had him as one of my PhD students.