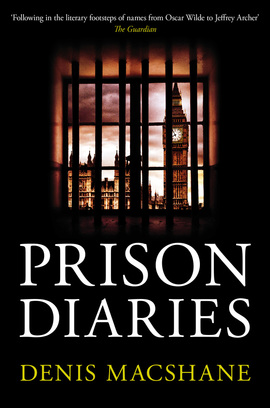 Two days before Christmas 2013, former MP Denis MacShane entered one of Europe’s harshest prisons. Having pleaded guilty to false accounting at the Old Bailey, he had been sentenced to six months in jail. Upon arrival at Belmarsh Prison, his books and personal possessions were confiscated and he was locked in a solitary cell for up to twenty-three hours a day. Denis was the latest MP condemned to serve as an example in the wake of the expenses scandal.

Written with scavenged pens and scraps of paper, this diary is a compelling account of his extraordinary experiences in Belmarsh and, later, Brixton. Recording the lives of his fellow prisoners, he discovers a humility and a willingness to admit mistakes that was conspicuously lacking in his former colleagues at the House of Commons.

Woven into the narrative are thought provoking reflections on a range of important topics, from the waning of public confidence in MPs – and the high-profile termination of his own political career – to the failings of the British judicial system.

Above all, Prison Diaries reveals what life as a prisoner in Britain is really like, addressing issues such as rising inmate numbers, dehumanising conditions, high incarceration rates, lack of rehabilitation and an endemic political disinterest. This honest and fascinating diary is both a first-hand insight into the current prison system and a report on how it simply does not work.

[A] brilliant account of Denis time in Belmarsh and Brixton. It is a great book, by turns analytic, personal and passionate. We get a strong sense of the absurdity of the prison system and its appalling failures. A must read.

Independent Politics Books of 2014: Good books that shed light on specific subjects include Prison Diaries, by Denis MacShane, for whom it is clear that prison doesn’t work.

The diaries become vivid, often moving and always generous to fellow inmates…MacShane is eloquent about the loneliness of being in prison.

He provides a superb insight into the real injustice inherent in the prison system… MacShane has performed an invaluable public service by simply telling the stories, in unvarnished fashion, of fellow inmates being crushed by the system… MacShane writes with clarity and passion.

Day after day he documents the banality and pointlessness of prison life, the petty humiliations, the surly indifference of many of the prison officers and the overwhelming incompetence of the system as a whole. Rehabilitation, he finds, is a low, almost nonexistent priority. Indeed, from this account, it is hard to see how anyone could emerge a better person than they went in.

[A]n engaging account... He recounts [fellow prisoners'] stories as they are told to him, fascinating vignettes leaving many unanswered questions, and details many random acts of kindness. MacShane asks why so few MPs are involved in prisons, a topic that he himself did not take sufficient (or any) interest in until having personal experience of them. He does come away with a clear empathy with those behind bars and a strong sense that our current overuse of imprisonment is not the answer. Halfway through Prison Diaries, a fellow inmate, Darren, remarks: ‘everyone leaves here worse than when they came in’. Paradoxically, that may not be true for MacShane.

Because MacShane knows how to write, the litany of his discontents often have an amusing if bittersweet ring to them.

Following in the literary footsteps of names from Oscar Wilde to Jeffrey Archer.

The author began his working life as journalist – and this book is not just a diary, but a fine piece of investigative journalism.

Denis is one of the best journalistic writers I know, and the resulting book gives us the taste and texture of prison.