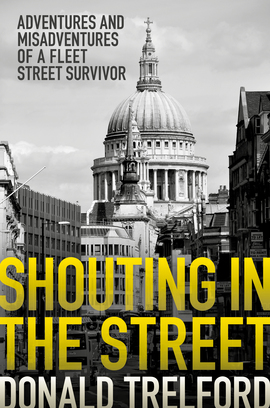 In this long-awaited book Donald Trelford recalls his adventures and misadventures during nearly sixty years in journalism. Described as the ‘Rocky Marciano of newspaper politics’, he fought off politicians, owners and predators over a quarter-century at The Observer, including Rupert Murdoch, who said afterwards: ‘I made the mistake of underestimating Donald Trelford.’

One owner sold The Observer because the editor refused to bow to pressure to support Margaret Thatcher. Another tried to sack him for writing the first report of atrocities committed by Robert Mugabe and his supporters in Zimbabwe. He tells for the first time the inside story of his complex relationship with Tiny Rowland – often tense, sometimes hilarious. He recalls how he was held at gunpoint by the FBI and strip-searched by the KGB. How a black dictator poked him in the chest and yelled: ‘Keep out of my politics, white man.’

While he was editor, The Observer won more press awards than any other newspaper. Trelford himself was described by Peter Preston the former Guardian editor as “a crusader… multi-talented, hands-on, a master of sport as well as news, shrewd and decisive.”

Written with style and humour, this is a compelling account of an important period in the history of the British press.

Donald Trelford sweeps his swashbuckling way through the glory days of print with views from the top and insights from an outsider which made his career at The Observer so ebullient and successful.

Exclusive!
I’m Not One To Gossip, But...
Have We All Gone Mad?
20 Things That Would Make the News Better