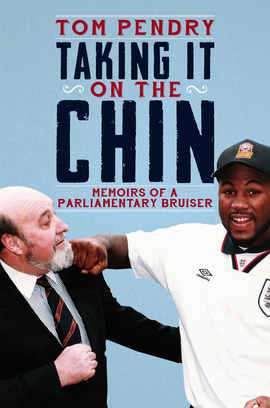 Taking It On The Chin Memoirs of a Parliamentary Bruiser

Surely one of the most colourful characters ever to have graced the Palace of Westminster, Tom Pendry has been a boxer, a bruiser and a scholar, whose political career as an agent, candidate, Labour MP and peer has spanned over sixty years.

As well as introducing key legislation, his time in Parliament saw him famously kick-start Tony Blair’s political career, lead the first anti-apartheid demonstration at a cricket match of an all-white South African side, and head up the successful fight to keep sport on Radio 5. During this time, he also took up the constituency case of a local GP complaining of cuts in drugs funding – Harold Shipman, Britain’s most prolific serial killer.

Well-known within the Labour Party as ‘the best Sports Minister we never had’, Pendry once dislocated his own shoulder showing Muhammad Ali how to punch, almost knocking out the world heavyweight champion’s wife in the process.

Full of revealing anecdotes and candid descriptions of colleagues, his memoirs throw new light on successive governments and great, epoch-making events, and are a mixture of light and shade, irreverent wit and deeply serious intent.

“The best Minister of Sport we never had!”

“As this book shows, Tom also carries a knockout punch when fighting his corner for boxing and sport of all kinds.”

“Tom has given so much over the years. His love of sport is legendary … now read about this fascinating man and his life.”

“The legendary Tom Pendry can certainly take it on the chin, but don’t ever think he’s not capable of delivering some pretty useful jabs too.”