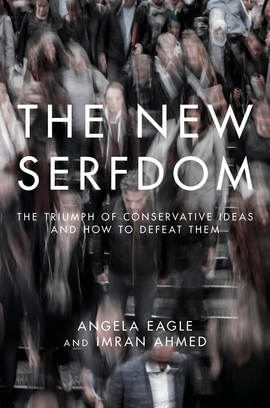 The New Serfdom The Triumph of Conservative Ideas and How to Defeat Them...

By Angela Eagle and Imran Ahmed

Great Britain is one of the wealthiest, most successful nations in the world. Why, then, do so many people feel short-changed?

The old assumption that ‘if you work hard and play by the rules, you can get on in life’ looks increasingly like a cruel joke. Homeownership, secure employment and fair wages seem like relics of a bygone era. Meanwhile exploitative workplace practices have created a new serfdom, leaving many people trapped in unfulfilling, underpaid work.

At a time of huge political upheaval and ever-increasing inequality, this powerful new book asks: how can we build a successful economy, powered by a happy and productive workforce that benefits everyone in the twenty-first century?

“Angela Eagle’s passionate advocacy of social justice, greater equality and the eradication of poverty make her one of the most formidable politicians I’ve ever worked with. Here, she teams up with another powerful political voice on the left, Imran Ahmed, to produce a cogent analysis of the current political situation and to map a path away from the market fundamentalism that brought us here.”

“A brilliant and insightful critique of Hayek and the age of market fundamentalism, documenting its horrifying toll on the lives of so many. A passionate and angry roadmap for democratic socialists in the twenty-first century. A triumph!”

"An important contribution to meeting the crying need for an economic philosophy for the centre left."