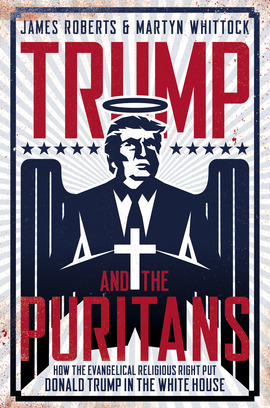 By James Roberts and Martyn Whittock

The year 2020 is a hugely significant one for the United States of America, marking as it does the 400th anniversary of the arrival of the Mayflower Pilgrims to the New World and their establishment of a ‘godly’ colony in (what was for them) the ‘American wilderness’. But it is also the year of the next Presidential election, one where the current occupant is expected to stand for re-election.

Many millions of Americans will not see this as a random juxtaposition of events, since for them the unlikely person of Donald Trump is the one chosen by God to implement a twenty-first-century programme of godly rule and the restoration of American spiritual exceptionalism that is directly rooted in those far-off times when Puritan settlers (who followed in 1630) first established a semi-theocratic ‘New Jerusalem’ in the ‘New World’.

The USA is the home of more Christians than any other nation on earth. In 2014 research revealed that 70.6 per cent of Americans identified as Christians of some form with 25.4% identifying as ‘Evangelicals’. Eighty-one per cent of them, around 33.7 million people, voted Trump in 2016. How can it be that self-described Christians of the ‘Evangelical Religious Right’ see, of all people, Donald Trump as their political representative and thus defender of their cause?

Trump and the Puritans argues that while Donald Trump is no Puritan, the long-term influence of these 17th century radicals makes the USA different from any other Western democracy, and that this influence motivates and energizes a key element of his base to an astonishing degree and has played a major part in delivering political power to Trump.

“James Roberts and Martyn Whittock have produced a timely, stimulating and sometimes provocative analysis of perhaps the most important and certainly the least understood section of Donald Trump’s base.”

“This engrossing book offers a unique take on Donald Trump's presidency, tracking America’s Puritan legacy from the Mayflower Pilgrims to his White House. In the process its authors explain the significance of Mike Pence, Brett Kavanaugh versus Christine Blasey Ford and Benjamin Netanyahu in the age of the Donald.”

“James Roberts and Martyn Whittock in Trump and the Puritans trace the source of Donald Trump’s appeal and some of his policies back to the religious convictions of the Puritan pilgrims who arrived on the Mayflower in 1620. Fascinating reading, and essential for an understanding of the influence of today’s evangelical Americans on the US President.”

“This is an essential handbook for 2020, the anniversary of the Mayflower landing and the year Trump bids for re-election. Consistently overlooked and belittled by political commentators, his considerable power base of evangelical Americans hails Trump as the unlikely instrument appointed by God to revive the shining ‘city on a hill’ of the early settlers. This is a readable, timely and revelatory insight into a dangerously neglected aspect of America’s cultural identity.”

“Regardless of how you feel about Donald Trump, you will be helpfully informed by reading Trump and the Puritans. If you’ve wondered why so many evangelicals, African-Americans and women seem to support Donald Trump in ways that puzzle his critics, this book will do a lot of explaining. What the authors provide are an array of substantiated quotes and pieces of information that will provide insights seldom found in one place.”

“What connects Hillary Clinton’s infamous ‘basket of deplorables’ with the Puritans who arrived on the Mayflower on America’s shores 400 years ago? In this fascinating study of the Trump phenomenon, James Roberts and Martyn Whittock lift the lid on a rarely examined part of his core vote: why, in 2016, 81 per cent of US evangelical Christians backed a man often characterised by his deep flaws. An essential and riveting read as Trump limbers up for his bid for a second term in the White House.”

"Roberts and Whittock’s book is insightful, well-written and sure to appeal to both devotees and sceptics of President Trump. Recommended reading before a dinner party."

"Moral condemnation of the President supplants any attempt to understand why Christians do quite often decide to vote for him... This book acts as an antidote to such intellectual laziness."

In Trump We Trust
Game Of Thorns
China Vs America
Trump: The Hidden Halo