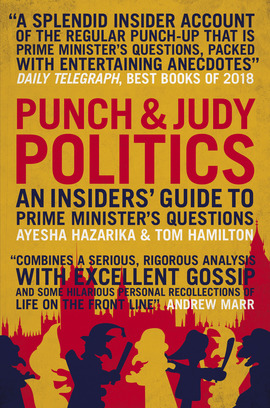 By Ayesha Hazarika and Tom Hamilton

Prime Minister’s Questions is the bear pit of British politics. Watched and admired around the world, it is often hated at home for bringing out the worst in our politicians. Yet despite successive leaders trying to get away from ‘Punch and Judy politics’, it’s here to stay.

Ayesha Hazarika and Tom Hamilton spent five years preparing Ed Miliband for the weekly joust, living through the highs and lows, tension and black humour of the political front line. In this insightful and often hilarious book, including an updated afterword discussing the key events of 2018, they lift the lid on PMQs and what it’s really like to ready the leader for combat.

Drawing on personal recollections from key players including Tony Blair, David Cameron, Harriet Harman, William Hague and Vince Cable alongside their unique knowledge, Hazarika and Hamilton take you behind the scenes of some of the biggest PMQs moments.

All the fireworks and the fear of PMQs from two people who’ve seen it from the inside, with unique insights from PMQs survivors – those who’ve done it and lived to tell the tale, from both sides of the Commons. This book captures both the importance and the quirkiness of the biggest event of the parliamentary week. Reading it sent shivers down my spine, taking me back to the thrill and terror that is PMQs.

First-rate […] a remarkably shrewd, well-argued and plausible assessment of what works and doesn’t work at this key encounter.

It’s a zippy, insightful read, helped immeasurably by contributions from the likes of David Cameron, Tony Blair, William Hague and Ed Miliband, the former Labour leader with whom both Hamilton and Hazarika worked during the coalition years. Hamilton and Hazarika make a good case for the enduring importance of PMQs in keeping the Government (relatively) honest.

An invaluable study by Ayesha Hazarika and Tom Hamilton of the Wednesday PM quizzing tells of arrogance, fear and astonishing preparation.

One of the best books on politics to be published this year!

A joy. […] For those wanting an insight into how politics works behind the scenes, Hazarika and Hamilton definitely oblige.

A splendid insider account of the regular punch-up that is Prime Minister's Questions, packed with entertaining anecdotes.

This is a really brilliant and interesting insight into a bit of politics that I think most people in Britain immediately recognise. It really illuminates not just that famous half hour of politics, but so much about why political parties make the decisions they do, and political strategy more generally. If you want to read one book to really get your head around how political parties work and plan, it would be Punch and Judy Politics.

Westminster junkies would be happy if their stockings were filled with a copy of Tom Hamilton and Ayesha Hazarika’s Punch & Judy Politics, a juicy insider account of what happens behind the scenes in prime minister’s questions.

That rare thing: a genuinely informative, funny and original book on politics, which takes something you vaguely thought you knew all about – Prime Minister’s Questions – and makes you look at it freshly. Hamilton and Hazarika combine a serious, rigorous analysis of tactics, strategies and outcomes across modern political history with excellent gossip and some hilarious personal recollections of life on the front line.

A fair, thorough and enjoyable study of the art and science of Prime Minister’s Questions. For those of us who have been participants, it brings back memories of dramatic moments we lived through; for observers, it reveals the techniques and tensions behind the duelling of political leaders. Well worth reading by anyone who wants to understand the workings of parliamentary democracy.

Theresa May
Coalition Diaries, 2012–2015
Beyond a Fringe
Break-Up